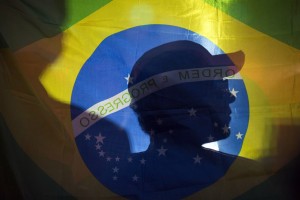 A man is silhouetted against a Brazilian flag during a protest in Rio de Janeiro, Brazil, Monday, June 24, 2013. Under pressure after more than a week of nationwide protests, Brazilian leader Dilma Rousseff said Monday her government will spend $23 billion more on public transportation and announced five core areas that leaders will focus on to speed political reform and improvements to government services. Rousseff made the announcement after meeting with leaders of a free-transit activist group that launched the first demonstrations more than a week ago and has called for new protests Tuesday.(AP Photo/Felipe Dana)