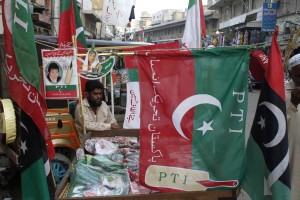 A Pakistani vendor selling flags of various political parties for the upcoming parliamentary elections, waits for customers on a roadside in Karachi, Pakistan, Tuesday, April 23, 2013. Pakistan is scheduled to hold parliamentary elections on May 11, the first transition between democratically elected governments in a country that has experienced three military coups and constant political instability since its creation in 1947. The parliament's ability to complete its five-year term has been hailed as a significant achievement. (AP Photo/Shakil Adil)