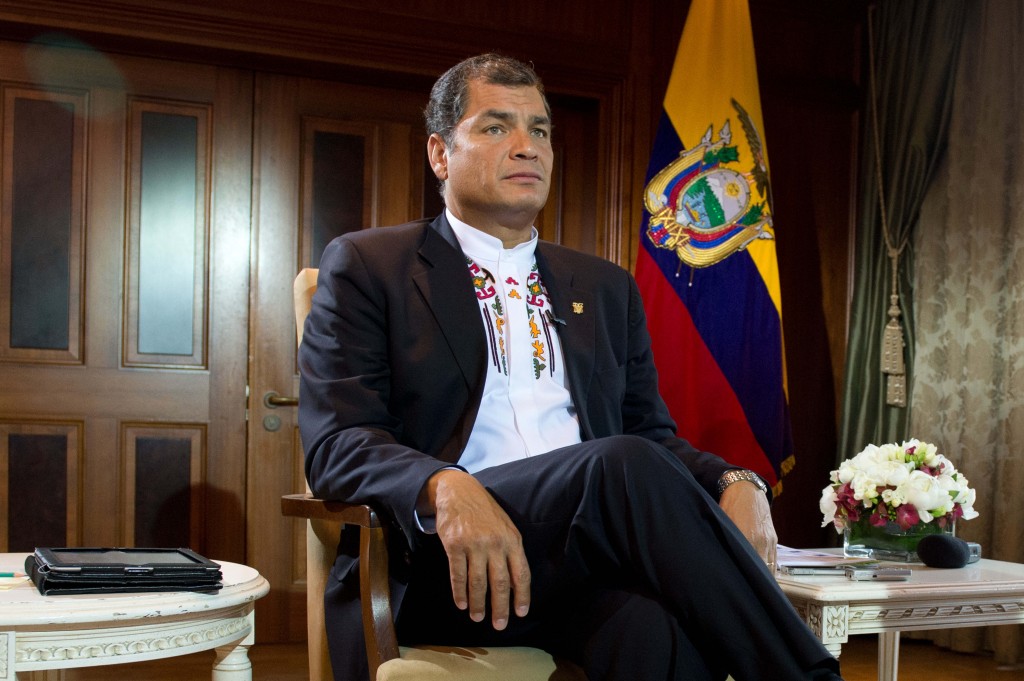 Point of contact: Where Ecuador's government and press clashed

January 15, 2007 — Rafael Correa took office as the president in Ecuador.

September 30, 2010 — He was kidnapped by police protesting against government austerity measures and declared a state of emergency. He was rescued by Ecuadorian army troops. He defined this rebellion as a coup attempt. The police chief resigned after uprising.

March 21, 2011 — President Correa filed a criminal libel suit against a journalist, Emilio Palacio, and three members of the board of directors of the Guayaquil-based newspaper El Universo. He asked the court to sentence each of the men to three years in prison and to fine them US$50 million. He also sought $30 million from the company that owns the paper. This lawsuit was caused by the column of the newspaper El Universo in which Palacio criticized the president himself for igniting the police rebellion and laying the blame at the door of police.

July 20, 2011 — Three directors and Emilio Palacio from El Universo were sentenced to three years in prison and fined a total of $30 million, plus $10 million in damages. The paper, Correa claimed, defamed him. Correa, the publication said, was attempting to limit freedom of speech in Ecuador. The president Correa filed another defamation suit for $10 million in damages against journalists Juan Carlos Calderón and Christian Zurita, authors of a book called Big Brother that accuses Correa’s brother Fabricio of corruption stemming from preferential access to state contracts.

January 16, 2012 — Ecuador’s national assembly approved changes to a media law that restricts what journalists can cover about candidates. Correa again defends it on grounds that it prevents major media companies, which often align with powerful candidates, from having too much political sway. But critics say it is to his benefit, as he likely runs for re-election in 2013. The National Press Club president expressed outrage recently about the president of Ecuador’s systematic and relentless attacks on the press.

February 27, 2012 — Ecuadorean President Rafael Correa pardoned three owner-editors and a columnist at the El Universo newspaper who had been convicted of defaming him in a controversial press freedom case. Correa also dropped his suit against authors of a book called "Big Brother" who wrote that the leader knew of and tolerated his brother Fabricio's allegedly corrupt business practices. He has long been at odds with the country's media. He accuses them of spreading lies in an attempt to undermine his government. The libel case against El Universo sparked a torrent of international criticism, including hard-hitting editorials in several US newspapers. Despite pardon, his actions in the cases have done grave damage to free expression in his country, the Committee to Protect Journalists said.

April 11, 2012 — Now, media law is in controversy in Ecuador. Ecuador's National Assembly passed a motion Wednesday to vote on a new media law.

In 1963 when Rafael Correa was born, Ecuador was one of the poorest countries in South America. Correa grew up in a working-class family in the city of Guayaquil, a business and manufacturing hub. It was a time of political upheaval; just three months after Correa’s birth, a military junta overthrew the president. Forty-three years later, Correa would become president of Ecuador.

When Correa was 5, his father was arrested and imprisoned for three years in the U.S. He had tried to smuggle cocaine into the country. His family of four children struggled financially, but Rafael and his brother, Fabricio, attended a prestigious catholic high school on scholarships. Later Rafael studied economics on scholarship at a catholic university in the city. Next, he spent a year with a Catholic mission in Zumbahua, a poverty-stricken area in the highlands about 159 miles north of Guayaquil. There he taught locals about developing small businesses and learned some of the indigenous language Quichua.

He met his wife, Anne Malherb, in Belgium when he attended graduate school there in 1991 after he won another scholarship. In 2001 he earned a Ph.D. from the University of Illinois. He returned to Ecuador and taught Economics at Quito's San Francisco University. In 2005 he took the post of finance minister, and that same year, he and his brother, Fabricio, founded the political party Alianza PAIS (Sovereign Fatherland Alliance).

Between 2005 and 2006, Rafael ran for president under the party calling for constitutional change. His party also signed an alliance with the Socialist Party of Ecuador. His campaign promoted social development over foreign debt payment and free trade with foreign countries. In 2006 he was elected president and sworn into office in January 2007.

Since that time, he has been committed to reducing poverty in the nation and increasing the sovereignty of the government. His press freedom violations have drawn international ire and attention.

To conclude, read a World Report 2011 by Human Rights Watch.