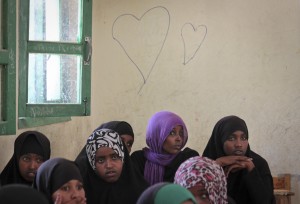 In this photo taken Sunday, Feb. 16, 2014, teenage girls attend an after-school club which the U.N. childrens agency UNICEF helps fund, one of whose subjects is discussion of the practice of female genital mutilation (FGM), at the Sheik Nuur Primary School in Hargeisa, Somaliland, a breakaway region of Somalia. Child rights advocates in nearly 30 countries are fighting to reduce the number of girls subjected to the cutting of their genitalia and last month about 60 religious and civic leaders in the capital of Somaliland, a semi-autonomous region in northern Somalia that has remained largely peaceful during Somalia's decades of conflict, attended a daylong seminar and debate on the subject. (AP Photo/Jason Straziuso)