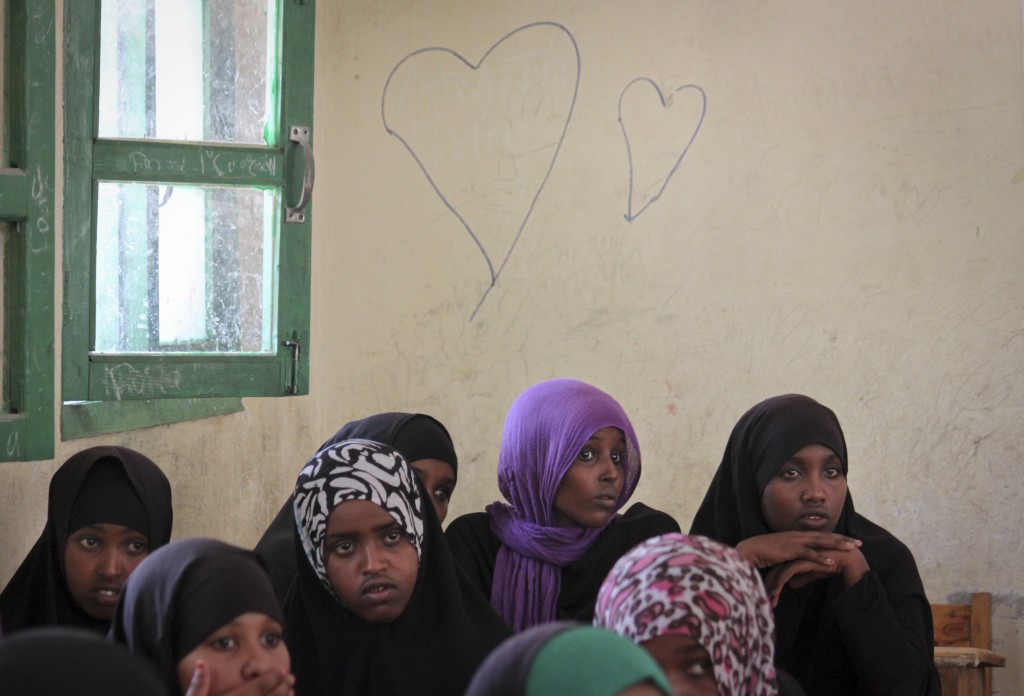 In this photo taken Sunday, Feb. 16, 2014, teenage girls attend an after-school club which the U.N. children’s agency UNICEF helps fund, one of whose subjects is discussion of the practice of female genital mutilation (FGM), at the Sheik Nuur Primary School in Hargeisa, Somaliland, a breakaway region of Somalia. Photo credit: AP Photo/Jason Straziuso

After a number of violent threats, a Liberian journalist went into hiding after her article about female genital mutilation was published in FrontPageAfrica on March 8, 2012. Mae Azango was threatened by phone and in person to stay silent or be “caught” and “cut” and received another threat from a female tenant of her own residence.

In this photo taken Sunday, Feb. 16, 2014, teenage girls attend an after-school club which the U.N. children’s agency UNICEF helps fund, one of whose subjects is discussion of the practice of female genital mutilation (FGM), at the Sheik Nuur Primary School in Hargeisa, Somaliland, a breakaway region of Somalia. Photo credit: AP Photo/Jason Straziuso

Azango, a reporter for FrontPageAfrica and New Narratives — a project supporting independent media, was awarded a grant for her writing from the Pulitzer Center. Azango, told the Pulitzer Center: "If I were a white woman, this wouldn't be problem," she said in the report. "But because I am a Liberian woman, I am supposed to know my place."

Azango’s article titled “Growing Pains: Sande Tradition of Genital Cutting Threatens Liberian Women's Health" was published on International Women’s Day. Female Genital Mutilation, or FGM, is legal in Liberia and five other countries in Africa. According to Azango’s article, two of three girls in Liberia are subjected to FGM.

The article explained the ritual of the Sande, a secret society of women that prepare girls for puberty. The Sande consider their rituals secret; women who do not keep the secret are often threatened with death. The article carried a message of education about the secret ritual procedure and encouraged mother’s to break from the Sande tradition.

FrontPageAfrica editor Wade Williams said the newspaper also received threatening calls. "They said that for us putting our mouth into their business, we are to blame for whatever happens to us," she said in the article.

Joanna Devanne, Country Director for New Narratives, told FrontPage about suspicious visitors to their office on March 15, 2012. Three women claiming to be Zoes, the name for those who carry out Sande customs and rituals, knocked on the gate of the Women Campaign International (WCI) where New Narratives is headquartered. “Any rural women who normally work with WCI would know that they're not open on holidays,” Devanne told _FrontPageAfrica_. “So chances are they were looking for us.”

CPJ, among other rights organizations, has implored President Ellen Johnson Sirleaf, Africa’s first and only female president, to investigate the threats and protect Azango and other journalists who report on female genital mutilation and other women’s issues.

Gabriel Baglo director of the International Federation of Journalists (IFJ) Africa office called the Sande threats a “throw-back to dark ages” of journalism.

Press Union of Liberia (PUL) President Peter Ouaqua told IFJ that Azango is not a “perpetrator, but rather crusader,” who “ought to be celebrated and not executed.”

In an op-ed piece on the FrontPageAfrica website New Narratives Executive Director Prue Clarke describes the threats as a set back to Liberia’s “quest for peace and development.” Clarke wrote:

“Mae and FPA have a long been one of the loudest voices in the Liberian media bringing the stories of real Liberians to national attention. Mae has broken stories in FPA on Liberia’s high rates of maternal health, on the failure of police to prosecute rape cases, on the dangers of Liberia’s high rate of teen pregnancy among many others.”