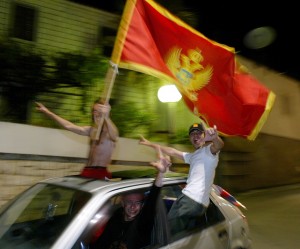 Ethnic Albanians, one holding a Montenegrin flag, jubilate in the streets of the Adriatic town of Ulcinj, Serbia-Montenegro, late Sunday, May 21, 2006, after an independent monitoring group said Montenegro voted for independence in a referendum. The Center for Monitoring said 56.3 percent of voters opted for independence from much larger Serbia. The European Union has said the vote for independence would be valid if more that 55 percent of those who cast their ballots voted in favor. (AP Photo/Visar Kryeziu)